My father wrote a poem book in his 60s. I translated it from Chinese to English and added many explanations of Chinese festivals, poets, culture, leaders. The book’s name is: Nuclear soldier: Stories and Poems of Chinese life. 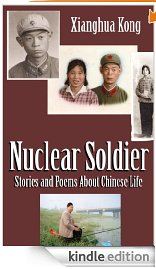 A book of stories and poems from an ordinary Chinese person’s point of view. The stories cover my father’s life from 1946 to the present day. He would say his life has been very ordinary apart from one highlight––he guarded Deng Xiaoping in 1965 when the famous leader visited “Nuclear City” in Qinghai Province. He also provided security for many famous nuclear scientists in the 1960s.

By enjoying the poetry and stories in this volume, the reader can understand the highlights of the past sixty-six years of history in the People’s Republic of China.

The first section is called “A Soldier’s Memoir.” The twelve poems are a remembrance of my father’s years as a soldier, 1963-1968, when he was between the ages of 17 to 22. Those are his young and happy memories. As a soldier, he protected the first nuclear bomb of China.

The second section, “Love is Priceless,” contains 19 poems about my father’s family and friends. They are about his grandmother, his uncles, and one describes the starvation he experienced as a child. Others are about his beloved wife– my mother, and about his children—my younger brother and me. Some are about reunions with his old soldier buddies. He cherished his brotherhood with the former soldiers from Nuclear City. He appreciated all the people who raised and helped him along the way. He praised those who have integrity.

The third section of 29 poems covers his retired lifestyle in our hometown and is called “Societal Observation”. Zhengzhou (郑州) is a medium-sized city in the middle of China. Topics of the poetry include the city’s changes, everyday life, playing bridge game, trading stocks, traveling to Hong Kong and Macao.

While this is not part of my company, it is part of me. Hope you’ll like it.