I believe this cooperation is mainly caused by progress by other regions in AMOLED. See our “Large AMOLED TV Summary and Comparison” of LG, Samsung, Sony, AUO, and Panasonic. 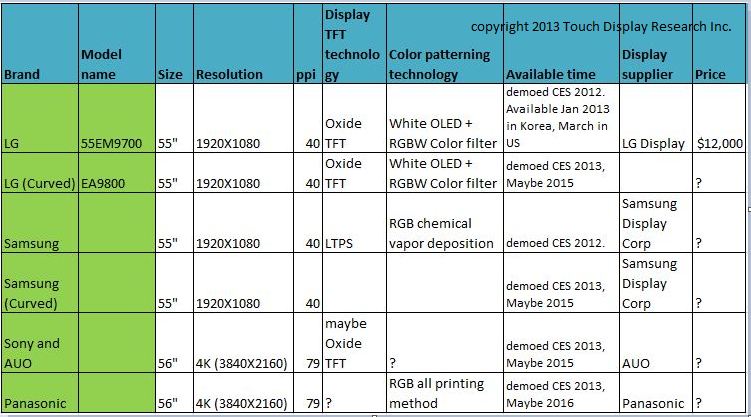 On the other hand, Samsung has no follow-up of when to bring its 55” OLED TV to the market yet.

Sony, AUO, and Panasonic brought OLED TVs to a higher level: Ultra HD (4K) resolution. Samsung and LG’s OLED TV stayed at FHD (1080p), but they made them curved this year.

With the other region’s AMOLED competition, it’s a good decision for LG and Samsung to cooperate. Will Samsung adopt white OLED method to only TV or to other size AMOLED?  What is the pros and cons of white OLED method? Will Samsung abandon (bottle up) its other color patterning technologies? More analysis can be found in our Touch and Emerging Display monthly report.

What’s the comparison between flexible display watches on the market or coming in the future? What’s Plastic Logic’s manufacturing status? What’s the flexible active matrix display roadmap till 2014? Detailed analysis can be found in the Touch and Emerging Display Monthly Report, February 2013 issue.

Today was the third day of FlexTech’s 2013 Flexible and Printed Electronics Conference. It continued to be popular with five hundred attendees and sixty exhibition booths.

E Ink demonstrated several flexible electrophoretic display products and color displays with front lighting at their booth. Below is a short video (2 min) of Jennifer Vail, senior marketing manager at E ink, who introduced the flexible products already in the market and future products.