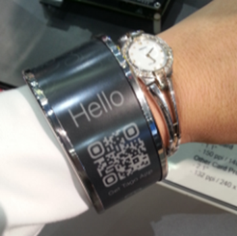 I tried on the bracelet with a flexible curved e-paper display, see picture here.

More information of the interview and analysis can be found in the Touch and Emerging Display monthly report and online market analysis articles for members.

I just came back from the 2014 FLEX conference and the SID LA Symposium. There are many highlights in these 2 conferences. One of the exciting news is about the Organic TFT (OTFT) backplane AMOLED.

On Feb 6th, 2014, Plastic Logic’s director of research and partnerships, Mr. Mike Banach gave a presentation titled “A New Frontier for Flexible Displays”. At the same day, both Plastic Logic and Novaled announced their partnership and their demo of OTFT backplane AMOLED.

Their demo is a monochrome flexible AMOLED, targeting for wearable applications. Plastic Logic’s CEO, Indro Mukerjee, said, “2014 will be the year that wearable technology starts to go mainstream.” 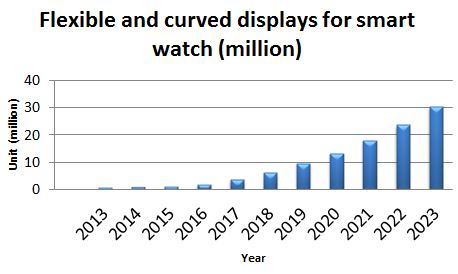 It is said Merck’s organic semiconductor material was used in the OTFT prototype.

As we covered in our “Flexible and Curved Display and Lighting Technologies and Market Forecast” report, Sony has demonstrated OTFT backplane AMOLED before.

What’s the comparison between flexible display watches on the market or coming in the future? What’s Plastic Logic’s manufacturing status? What’s the flexible active matrix display roadmap till 2014? Detailed analysis can be found in the Touch and Emerging Display Monthly Report, February 2013 issue.