This week Samsung’s head of mobile business marketing, Mr. Lee, announced they are planning to launch a mobile phone with a curved display in October, but gave no specifics on the display. Touch Display Research believes that three types of display are suitable for flexible/curved display on mobile phones: curved AMOLED, curved LCD, and curved electrophoretic active matrix.

Samsung has registered the trade mark “YOUM” for its flexible AMOLED. Rumors floated around before the release of the Galaxy Note III that it would be the first device with a flexible AMOLED, but that didn’t happen. Samsung also demonstrated a flexible LCD several years ago.

Today Microsoft announced the updated Surface tablet PCs: the Surface 2 and Surface Pro 2. This time both will use a display with the same resolution––1920X1080. 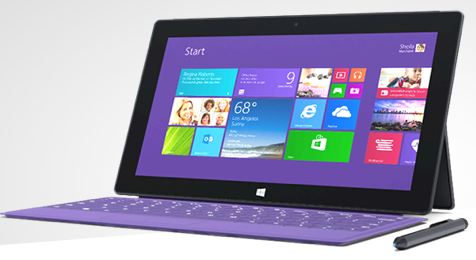 In October 2012 and February 2013, the first Microsoft-branded tablet PCs were released––the Surface RT and Surface Pro. After years of focusing on software, Microsoft now had a tablet product in addition to hardware lines such as the Xbox game console.

As we wrote in the August issue of Touch and Emerging Display report, we believe one of the mistakes that Microsoft made was with the display. A 10.6” size and two different pixel formats for the RT and the Pro were used. 10.6” size was never mass-produced by any display manufacturer before Surface, therefore both of the 10.6” displays were custom made, and that meant a high cost. The result was the high price of the original Surface tablet.

Nevertheless, the second round should be better. Microsoft used the same pixel format this time for both the Surface 2 and Pro 2. More analysis about the touch screen and active pen features can be found in our Touch and Emerging Display monthly report.

I just came back from Touch Taiwan 2013 and the associated International Display Manufacturing Conference (IDMC). With about 400 exhibitors at the show, it was certainly very hot, just like the weather in Taipei.

I had a chance to touch both Sharp and Microsoft’s large size touch panel in Touch Taiwan. Both use metal mesh type ITO-replacement material on their touch panel. 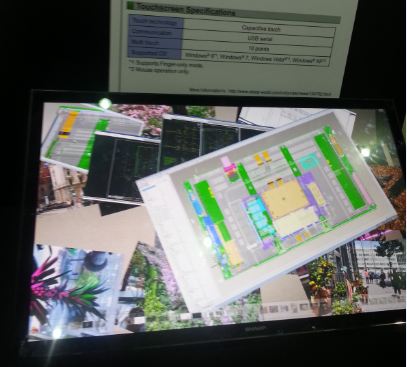 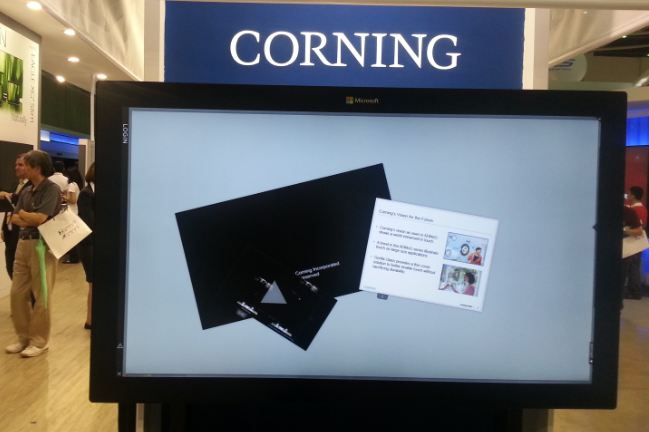 Sharp showcased a series of 20”, 32” and 70” touch panels and claim they have very high performance due to the high SNR (signal noise ratio). Microsoft’s 55” touch demo was showcased in Corning’s booth, as they used Corning’s Gorilla Glass as the cover lens.

Touch Display Research believes that metal-mesh type materials have high conductivity and could fit best on large-sized projected capacitive touch panels. We forecast the ITO-replacement market will grow to about $4 billion by 2020.

Which companies are supplying metal-mesh type transparent conductor? What’s their manufacturing process?  What’s the market share of metal-mesh vs. silver nanowire vs. carbon nanotube vs. conductive polymer vs. graphene? More analysis can be found in our ITO-replacement report and the Touch and Emerging Display monthly report.