At Nth Degree Technology’s booth they demonstrated several types of printed LED lighting. One is a transparent blue LED light, two are flexible white LEDs (see image below), another is used as a signage. 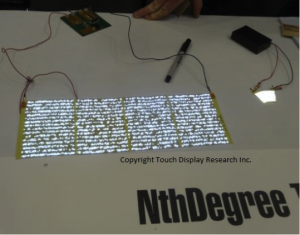 The construction process for the printed LED lighting:

What kind of application will this flexible LED lighting be used for? What is the time-frame for this this lighting to come to market?  What’s the comparison of printed LED lighting vs. OLED lighting vs. EL lighting? A detailed analysis will be in the upcoming Touch and Emerging Display Monthly Report, Feb 2013 issue.

I volunteered for SID (Society of Information Display) Bay-Area chapter, and helped with organizing the first 1-day “Display and Touch Technologies of the future 2013” conference as a conference co-chair. After 5 months of preparation, the 1-day conference was held on Jan 16th, 2013, and it was overwhelmingly successful with 160 attendees.

I had the honor to introduce the morning keynote: Jeff Han, General manager of Microsoft office division. Jeff Han was famous about promoting multi-touch since 2006, 1 year before the Apple’s iPhone in the market. Han was the CEO, founder and chief scientist of Perceptive Pixel since 2006. Han was named to Time magazine’s listing of the 100 Most Influential People in The World in 2008. His company was acquired by Microsoft mid-2012.

Jeff Han brought a 50” touch screen display demo to this 2013 conference. In his keynote, he first showed the video of touch being used by CNN for the president election news. Then he introduced some advanced research that Microsoft is doing. He walked to his touch display and demoed the touch and pen writing. He said, “When you are in the drawing mode, then you want to go to the next page, you do a swipe. But the screen shows you a line. Now you realized that you are in the drawing mode, not the touch mode. Then you have to go here, click this button to switch to touch mode. You see, that break the flow.” He emphasized that with simultaneous touch and pen technology, user can have the smooth flow.

As Jeff Han emphasized that with simultaneous touch and pen technology, user can have the smooth flow to work on the touch display.

Another touch company has touch and pen technology is N-trig. N-trig’s DuoSense had been adopted in several notebook PCs, such as the HP’s touchsmart 12.1”. DuoSense also was adopted in the HTC’s flyer tablet.

The most successful (with the high volume sold) touch and pen device might be the Samsung’s Galaxy Note. It’s a hybrid of phone and tablet (some people call this phablet). The Galaxy Note’s touch is the combination of an on-cell projected capacitive AMOLED with a wacom digitizer pen beneath the OLED display. Samsung reported that the original Galaxy Note sold 10 million units in 10 months. The Galaxy Note II is even more popular, with 5 million units sold in 2 months.

TDR’s areas of expertise include the following:

The key characteristic that differentiates Touch Display Research from other market research firms is: