Today Apple announced its new iPad Pro with an active pen, which Apple branded it as “Apple Pencil”. 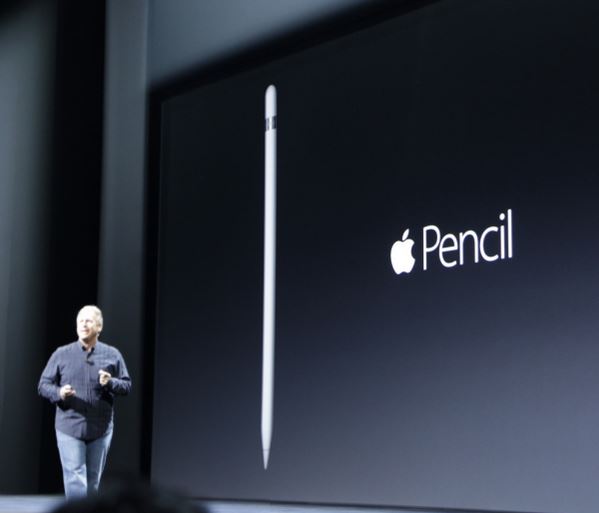 One year ago, in Touch Display Research article published in SID Information Display Journal July/Aug 2014 issue,  Dr. Jennifer Colegrove wrote, “In 2007, when Apple released the first iPhone with a projected-capacitive touch screen, it had the benefit of multi-touch, zero-force touch, good durability, etc.  Referring to the first iPhone at the Macworld Expo in 2007, Steve Jobs told his audience, “Nobody wants a stylus.  So let’s not use a stylus.  We’re going to use the best pointing device in the world.  We’re going to use a pointing device that we’re all born with – born with 10 of them.  We’re going to use our fingers.”  Job’s point of reference for this statement was the old resistive touch pen.  Since 2011, Apple has been investing heavily in active pens, and it’s my strong belief that Apple will release an active pen soon.”

While finger touch is intuitive, active-pen writing is accurate, easier, and can add a personal touch.  Pen input is very useful in education and in certain types of language input, as well as in medical, financial, industrial, and content creation or markup applications.  Touch Display Research defines an active pen as one with an electronic circuit.  Some active pens have an integrated battery in them, some not.  A passive pen has neither an electronic circuit nor a battery.  According to our research, there are nine types of active-pen technologies and six passive-pen technologies, as summarized in figure here. 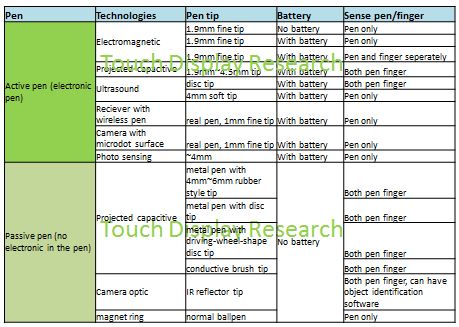 Active-pen technology is superior to passive-pen technology in terms of accuracy, pressure sensing, and ability to draw fine lines.  Active-pen usage should therefore experience rapid growth in the next several years.  In the Active Pen Technologies, Supply Chain and Market Forecast report, Touch Display Research forecasts that the market for active-pen writing modules (including pen sensor, one pen, and the controller IC) will increase from $931 million in 2014 to $4.17 billion in 2020. 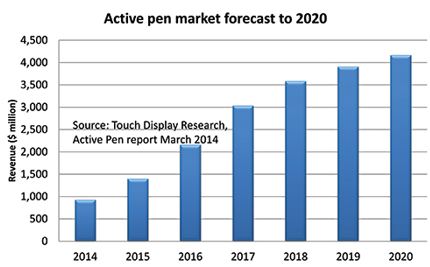 As we know, N-trig was founded in 1999 with headquarter in Israel. N-trig has received over $120 million funding before. Their old investors include Microsoft. Microsoft hasn’t announce the amount regarding this acquisition yet. Rumors hold Microsoft paid about $200 million to acquire the pen-related part asset of N-trig.

Touch Display Research believe active-pen technology is superior to passive-pen technology in terms of accuracy, pressure sensing, and ability to draw fine lines. In the Active Pen report, Touch Display Research forecasted that the market for active-pen writing modules (including pen sensor, one pen, and the controller IC) will increase from $931 million in 2014 to $4.17 billion in 2020. 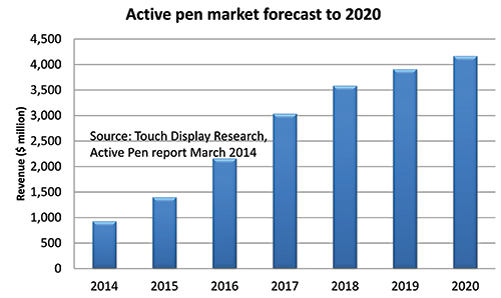 Touch Display Research believes this is a good move for Microsoft.  More analysis about Microsoft, N-trig and Apple can be found in the Touch and Emerging Display monthly report, May issue. 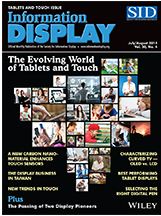 Here is the link to the full article. You can become a SID member right now on their website: www.sid.org.