AR, VR, and AI are the next big things. Apple, Google, Microsoft, Amazon, Samsung, LG, Intel, Qualcomm, Facebook are all working on these technologies.

Figure 1: Apple is getting ready for AR, VR and AI

In 2013, Apple acquired Prime Sense which has camera based gesture control technology.

In August 2016, it is said Apple acquired artificial intelligence (AI) startup Turi Inc. for about $200 million. Turi’s technology could be add into Apple’s Siri and help with human machine interaction.

Touch Display Research forecasts that sensors for AR, VR, and AI market will be $97 billion in 2017, and will reach $160 billion in 2022. The $160 billion opportunity will be gobbled by over 200 sensor suppliers and integration companies.

The “Sensors for Augmented Reality, Virtual Reality and Artificial Intelligence market 2016 Report” is available immediately and includes a PowerPoint file (over 320 pages) and an Excel database.

Today France-based Valeo just announced it acquired 100% shares of gestigon, a German start up that is specialize in touchless HMI (human machine interface). The terms is not disclosed.

Currently, there are also rumors about Intel is planning to buy Israel-based Mobileye for $14 billion, according to Reuters, and Jerusalem Post. (Update: These rumors became reality on March 13th, Intel announced to acquire Mobile eye for $15 billion.)

The automotive industry’s adoption of new technologies has accelerated in the past couples of years. More and more touch screens and displays are integrated in the automobiles for better infotainment, intuitive control, and safety. ADAS (Advanced Driver Assistant Systems) and touchless human-machine-interaction have saved lives. Touch Display Research forecasts the overall automotive touch, display, ADAS and touchless HMI market will grow from $15 billion in 2017, to $60 billion in 2023. 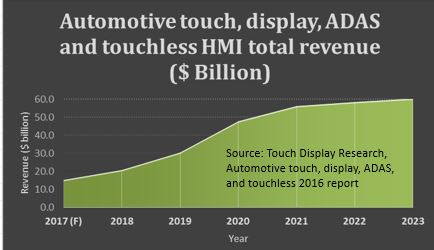 The “Automotive touch, display, ADAS and touchless HMI 2016 Report” is available immediately and includes a PowerPoint file of over 380 pages and an Excel database.

Recently, Korea media reported that Samsung confirmed that it is acquiring QD Vision. The confirmation comes from the head of Samsung’s Advanced Institute of Technology Jung Chil-hee. There is no words about the financial detail, but rumors hold Samsung will pay about $70 million. 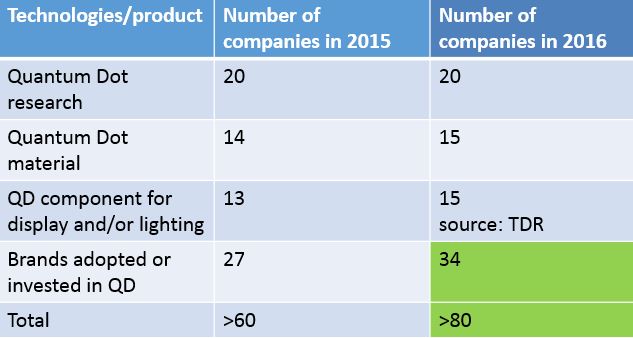 More analysis can be found in the “Quantum dot 2016 report” and the “Touch and Emerging Display monthly report”.

“…your latest Quantum Dot report, we think yours is by far the most accurate by the way, others I’ve seen are not accurate even for their 2013 numbers!!”—a client of our Quantum Dot display and lighting report

“…your presentation at Monday’s seminars was the most engaging and well presented out of all the speakers.”–an attendee of Monday Seminar at SID DisplayWeek.